The “Late Christopher Bean” is a comedy drama adapted from “Prenez Garde à la Peinture” (Beware of the Painting) by René Fauchois. Emlyn Williams’s anglicised version has the action moved to the English countryside and was first performed in 1933. The scene is laid in the living room of “The Old House”, the Haggett’s home in Childer Barnston, a small village somewhere near the centre of England. The time is circa 1912.

The play depicts the effect on a respectable but not well-off family of the discovery that paintings bequeathed to them by a neglected artist are now highly regarded and very valuable. The ensuing outbreak of avarice affects most of the household, but the family’s maid Gwenny, a Welsh woman of mature years, remains uncorrupted and virtue is finally triumphant.

See the programme for further details, it cost one shilling or 12 pence (5p in today’s money). 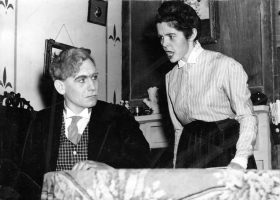 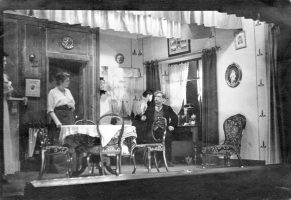 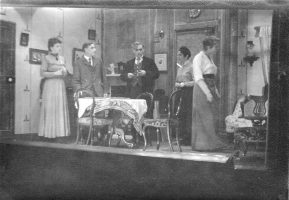 In 1952 the Society was able to rent an old Nissan hut ex-cinema on the old WW2 Royal Marines Camp in Butts Close. This was the very first production in The Little Theatre. The Little Theatre was unfortunately demolished in 1972 to make way for a new housing estate – Marines Drive and Town End Road. Read more… History of FDS.

Emlyn Williams, who encouraged the Society in its early days, sent a signed photograph for the opening night and it was hung in the foyer of the theatre.