A one-act play performed at the ODN Drama Festival, Unicorn Theatre in Abingdon on 12th June 2015 and for FDS members in the Barber Rooms, All Saints Church, Faringdon on 1st July 2015 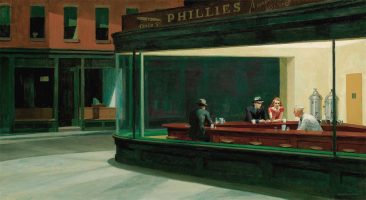 This one-act play ‘Nighthawks’ takes Edward Hopper’s well-known painting of the same name as its starting point, setting out to provide the back-story of the characters depicted in the painting and their air of loneliness and isolation. The play is set in 1941, with some of the action set prior to the attack on Pearl Harbour and some in the aftermath. What has happened to the characters to leave them looking as they do? The audience is presented with a possible reason and are left to draw his or her own conclusion. As far as possible the action and dialogue is true to the period, as are the facts on which the dialogue is based.

To read more or purchase the script for this or other of his one-act plays visit the author’s website at www.petepanto.co.uk.

There was no poster for this production so I made one up.