A comedy by Alan Ayckbourn
Produced by Hazel Riddle

A mother is unable to escape from baby talk in this short play from the collection Confusions by Alan Ayckbourn, which deals with the human dilemma of loneliness. The action of the play takes place in Lucy’s living room. Time – the present.

A Handful of Change

There is no information on this play, which was written and produced by a member of the society, but 13 actors took part in it.

Clara’s on the Curtain 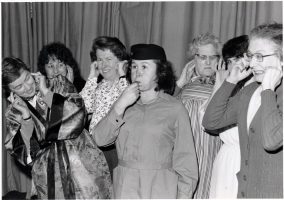 A comedy by  Arthur Lovegrove
Produced by Deirdre Hamley

The curtain is about to go up on the Wockley Women’s Guild variety and dramatic show when one of the leads loses her voice. This is the start of a series of calamities, not lessened by well meant but embarrassing offers of help. At the last moment all is well, and Clara even learns how to work the curtains.