Performances start 7:30 pm. Doors open 30 minutes earlier.
Tickets: £12. No concessions. A drink is included.
Tickets were available from our Online Box Office (this production has now finished).
Buscot Park will open to theatre goers from 6:30pm. Picnics welcome. Seating is limited to 50 per night so please book your tickets early. Parking available in the grounds. No wheelchair access to the theatre.

Confusions by Alan Ayckbourn consists of a series of 5 interconnected one-act plays of which 4 will be performed in this production. It was last performed by FDS: Confusions 1999

Housewife Lucy has the difficult job of looking after the children alone whilst her husband is away. This job of looking after the children has taken over her life; so much so that she never leaves the house and doesn’t even have the time to change out of her pyjamas. Concerned neighbour Rosemary decides to come around to check on Lucy and to give her the number of her husband Harry who has been trying to call her for a while, and is shocked to find Lucy rushing around trying to look after the children and revealing that she doesn’t listen to bells. Rosemary enlists the help of her husband Terry to discover what is wrong with Lucy. Terry is a chauvinist with no respect for Rosemary, and this attitude is clear in the way he speaks to both Lucy and Rosemary. However Lucy, in her permanent state of the “mother”, treats the pair in the only way she knows how, as children. This approach quickly puts Terry in his place and puts an end to the petty squabbles between Rosemary and Terry, and the end result is the pair leaving hand in hand (if rather reluctantly). 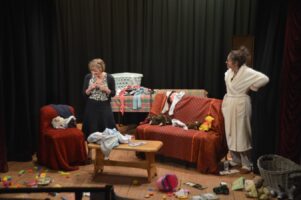 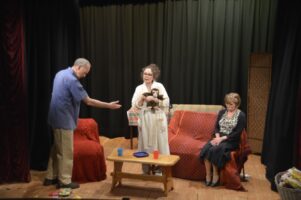 In a hotel dining room, two couples at adjoining restaurant tables realise an unwelcome common bond, assisted by an interactive waiter. At the table on the right, Mrs. Pearce suspects her husband, recently returned from a 3-week-long business trip in Italy, is having an affair. At the other table, Polly is not been frank with Martin and is starving for her husband’s attention. Martin, who really doesn’t care at all about Polly’s affair, only wants to talk about his work. There’s clever direction of the alternation between the two sets of conversations. As the evening wears on, the angst between these parallel couples amps up until it reaches the boiling point. All the while, the poor waiter can’t help but overhear their increasingly confrontational conversations while he attempts to take their orders and serve their drinks and meals. A twist to the plot-line spices the ending. 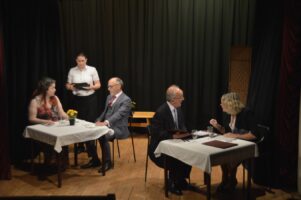 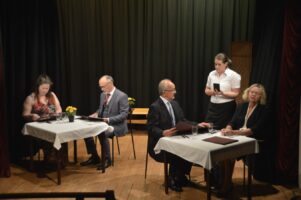 A Talk in the Park

In a park, the same in which Gosforth’s Fete took place, sits five strangers on separate park benches, each with their own troubles. Arthur, a rather suspect fellow with an interest in cigarette card collecting and women-watching, sits next to Beryl and starts to relate his story of his likes and dislikes. Beryl is understandably quite disturbed by this, and proceeds in leaving her current bench and going to sit with Charles. Beryl is a young woman with a husband who beats her, and so she tells Charles this story and reads out a letter from the “bastard”. Charles becomes quite sick of hearing this, so excuses himself and goes to sit next to man-hating dog-loving Doreen. Charles is an old business man on the verge of bankruptcy and so has no time for the youth of today. He reminisces on a happier time with his wife and children and asks Doreen to help him decipher his business report. Doreen is at this point very scared of the man who she thinks is perving on her, and so she sits next to Arthur. Arthur at this point is happily relaxing on his bench and so is very annoyed with being disturbed by a paranoid woman who starts to harp on about her dog. Doreen relates the story of taking her dog to the vets to get the snip, which is not a topic Arthur is interested in so he sneaks off leaving Doreen talking to herself. The scene ends with each character trying to get the attention of the person they were trying to talk to, but failing. The end result is four miserable people who are all feeling ignored, despite the fact that it is their own fault for ignoring everyone else. 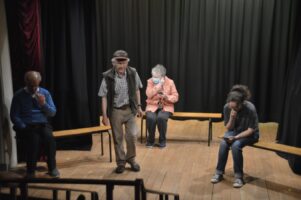 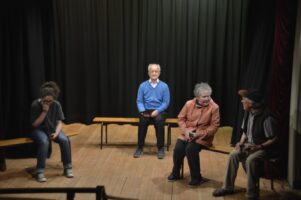 Publican Gosforth is running the village gala. Due to a big mistake, bad personal news from Millie Carter is publicised over the public-address system. Millie’s fiancé Stewart Stokes becomes extremely aggravated and drowns his sorrows with alcohol. Councillor Mrs Pearson, after the most disorganised greeting is electrocuted by the PA system. Gosforth’s Fete starts like all village fetes do. However it develops into chaos and as things continue to go wrong the play climaxes to a complete disaster. 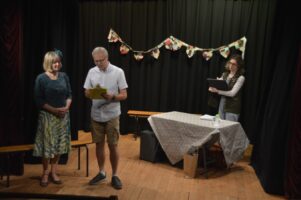 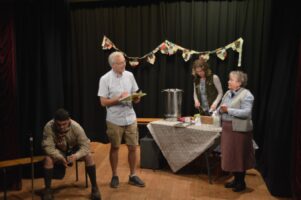 Due to an unexpected power cut on the Thursday evening, just as the curtain was about to open, everything was moved outside onto the lawn and there three plays were performed before darkness stopped play. 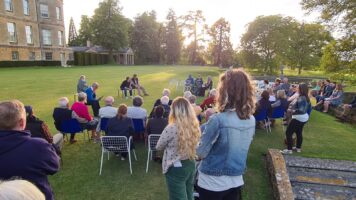 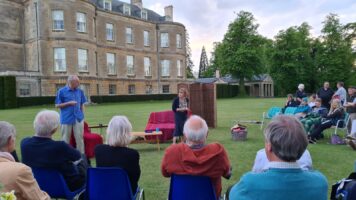 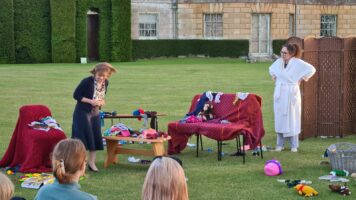 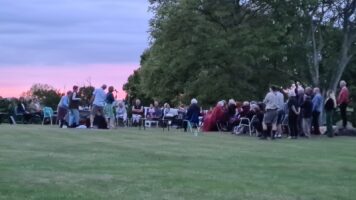 Just to say we both so enjoyed last night and felt for you all as you tried to tackle the problem of no electricity. In the end, it was even more special to be able to watch outside where you could move around freely. Often the script befitted the surroundings. Well done. Superb fun and wishing you all success for the next two evenings.

Our first experience of a FDS production at Buscot Park Theatre was truly memorable and we were so impressed at the calm and resourceful way in which you all dealt with the situation. It was an excellent and humorous production and the plays translated into the modern day so well. The auditorium was stunning and how did you manage to book the sunset? We look forward to the next production at Buscot and to seeing the inside of the theatre too!

Thursday evening "The show did go on and was marvellous!"

The acting was excellent by any standard, the ability to adapt and overcome the power problem was impressive in the extreme and the good humour shown by everyone involved in Thursday’s performance made for a memorable experience. The actors adapted to the outdoor conditions and makeshift theatre space effectively: each spoke loudly and clearly and shifted their positions to suit the semi-circular auditorium. Special mentions to the “Talk in the Park” actors, who opened the show and acted continuously throughout their scene, and to the “Gosforth’s Fete” cast who embraced the chaos and delivered lines laden with new irony such as “I hope it doesn’t rain” with great humour and without breaking character. Of course, the production team, who worked to make the outdoor space functional at a moment’s notice, were the heroes of the night and the ‘telephone rings’, ‘thunder and lightning’ and ‘marching band’ only added to the fun. I suspect that the true nature of FDS was at work here, turning disaster into triumph with great positivity. Thank you for an unforgettable and very entertaining evening.

We went to Buscot Park Theatre to see a performance of Confusions – four one act plays. Unfortunately the electricity went off just before the plays were due to start so Faringdon Dramatic Society did what they are good at – they improvised and turned it into outdoor theatre! Three very funny plays were performed under the setting sun of a late May evening. Well done to all the cast and crew – and Gary Bates' sound effects were better than in any blockbuster movie! 😁

Tania from Stanford in the Vale

We were lucky enough to see both the 3 plays done outside – brilliant – as well as seeing all 4 plays on Saturday evening (our daughter was in the 4th play that couldn’t be done outside). Massive thanks to all concerned for enabling us to return to see her. And what a performance – brilliant casting, excellent delivery – fantastic acting all can only be described as Outstanding!

We came to watch the show on Thursday evening and just as we were about to go in and take our seats, the power went! Well done to the cast and crew for overcoming this obstacle! I rather enjoyed watching the performance outside on the lawn of Buscot. I particularly enjoyed Gosforth's Fete and I would like to say a big well done to everyone involved!

Take Alan Ayckbourn’s Confusions + Buscot House theatre + Faringdon Dramatic Society and what do you end up with? One of the most entertaining, hilarious evenings for a long time. Superbly acted, the timing was spot on and the characters so believable. Well done one and all. Our sides are still aching.

A lovely evening enjoying some traditional English theatre. The characters were so believable and acted their parts well! A-maz-ing

The performance was excellent. I felt that the actors were very talented and the theatre was a very special place. Thank you.

Six of us came to watch the play and we thoroughly enjoyed the whole evening. The acting was amazing. A very very excellent evening. So looking forward to your next production.

Saturday evening "Great choice of play & brilliant acting of it."

Above all, though, I was delighted to see so many performers in FDS (or were some borrowed from other groups? *). With the demise of our own Lechlade Players, it's good to know that there is still willing talent out there to want to entertain us. We are so grateful. (* No, all home grown members over too many years to mention!)

What a fabulous performance of Confusions. Wonderfully acted with very simple and clever sets. I was laughing from the start and had laughter tears rolling down my cheeks by the end. It was pure joy…. Thank-you

Loved the four short stories. Acting was great, stage sets and costumes all good. We all had a really enjoyable evening.