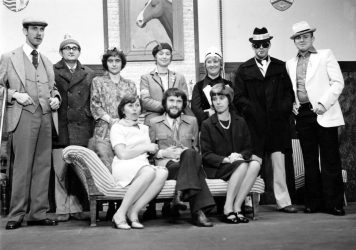 In the ancestral home the nerve-shattered Chester is again menaced at every turn by his old enemies Capone and Wedgwood. In the ancestral flowerbeds Lord Elrood lurks with his shotgun, ready to repel attacks by the butcher’s boy, the postman, and other desperate characters. Through the ancestral living-room wander Maggie and Bert, come for two-and-sixpence-worth of gawp and suitably awestruck by the goings-on of the country house set, or, to put it another way, inmates. The plot is somehow concerned with missing pictures.

A new era begins! This was the first production in the new theatre and community centre that was created in the old Pump House (photo). This was the only production during this year, after a three-year gap. Only a few plays had been produced since 1972 when The Little Theatre had been demolished. Read more… History of FDS.