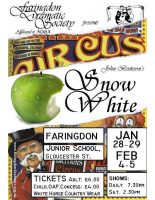 Winner of the ODN Panto Festival 2005 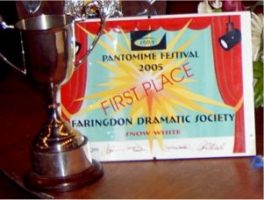 The poor downtrodden folk of Faringdon are frightened away from their dancing by the arrival of the wicked witch Queen Wormelda. (Boo). Not only has she cast her spell over the King and married him, she has magicked our hero Billy Biggle’s into a bottle. Luckily the good hearted King Woodynut makes her release Billy, who overhears Wormelda’s plan to kidnap the orphan baby Prince of the next door Kingdom. 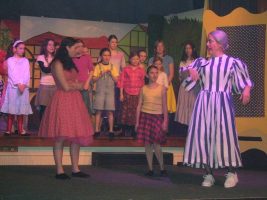 Billy rushes to save the baby Prince and enlists the help of Tiggles the tiger who’s on his way back to the jungle having finished his degree at Oxford. Tiggles tells Billy to hide the Prince with his circus friends.

Meanwhile the Queen claims the throne and with an evil spell imprisons the King inside a mirror. She asks the Looking-glass “Who in this land is the fairest of all?” Of course the answer is the Baby Princess Snow White, who is brought on by nurse Desiree Lallybody, a scatty woman of indeterminate age with somewhat dubious dress sense.

You’ll need to be prepared to shout at the top of your voices as Billy and Tiggles recruit everyone to help protect Snow White. Billy’s plans to be an actor and Tiggles’ plans to return to the jungle are soon to be sidelined by the need to protect the growing Prince and Princes.

Time passes rapidly in panto-land and we are soon transported to Snow White’s eighteenth birthday. It is a sad day for her because the Queen is unkind. Help is at hand as the nurse sings about her misspent youth and Billy and Tiggles introduce Snow White to the grown up and dashingly handsome Prince Boldligo in his red nose circus clown disguise. The villagers celebration is brutally cut short as the Queen angrily rushes in.

On the Mirror’s assertion that that Snow White is now the fairest in the land the Queen rushes off to find some simpletons to do her evil deeds. Poor Velda Vixen, Silas Sly and their friends are soon rounded up and magicked into becoming her robber gang with the aim of kidnapping Snow White.

To the delight of the villagers Allyoop the circus ringmaster and Pepe Mint agree to put on a show to entice the Queen out of her castle. She is lured away and our heros are free to attempt a rescue.

Can Snow White be saved? Will the King be released from the Mirror? What is in store for Nurse Lallybody, Billy, Tiggles and the gang? Come see the show! 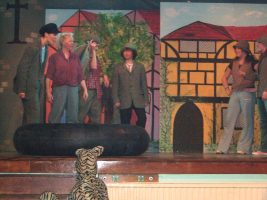 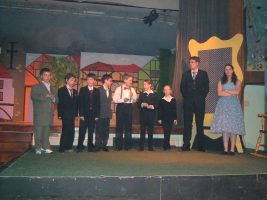 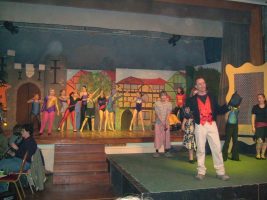 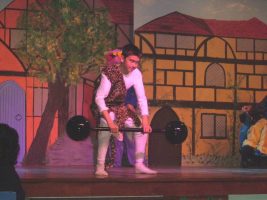 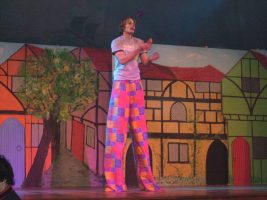 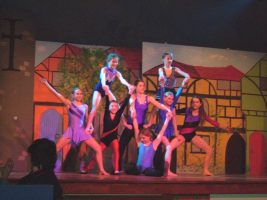