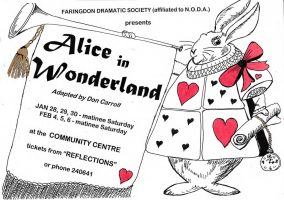 Winner of the ODN Pantomime Festival 1999

A children’s story by Lewis Carroll adapted for the stage by Don Carroll.

Alice is sitting with her sister outdoors when she spies a White Rabbit with a pocket watch. Fascinated by the sight, she follows the rabbit down the hole. She falls for a long time, and finds herself in a long hallway full of doors. There is also a key on the table, which unlocks a tiny door; through this door, she spies a beautiful garden. She longs to get there, but the door is too small. Soon, she finds a drink with a note that asks her to drink it. There is later a cake with a note that tells her to eat; Alice uses both, but she cannot seem to get a handle on things, and is always either too large to get through the door or too small to reach the key.

Alice’s strange adventures continue until eventually following a court scene where she is wrongly accused, she wakes up, it has all been a dream.

We managed to get back into the Community Centre for this production. It closed down completely soon after and an attempt was made to obtain a 20-25 year lease on just the theatre, but it was refused. Read more… History of FDS. 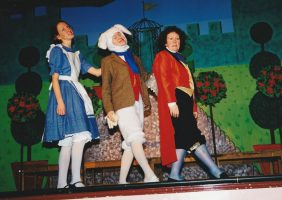 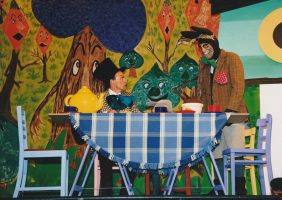 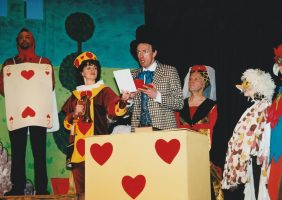 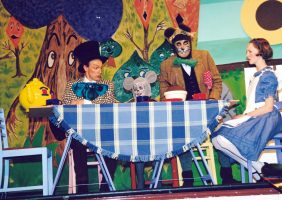 8 shows were performed over 6 days.