Brush Up Your Shakespeare

An evening of Shakespearean music and drama.

The theme for the evening examines the effect of letters, potions and tricks on the course of true love. In the words of Hero in ‘Much Ado About Nothing’: ‘SOME CUPID KILLS WITH ARROWS, SOME WITH TRAPS’

The Duke is blindly in love with a noblewoman, Olivia, who rejects his advances in favour of mourning for her dead brother. Viola has disguised herself as a boy and, having found employment in the Duke’s household, has fallen in love with him. She is sent to woo Olivia on his behalf and in doing so becomes the object of Olivia’s affection. Meanwhile, in a plot cunningly enacted by members of the household, Olivia’s puritan manservant, Malvolio, is tricked into thinking that Olivia loves him.

Much Ado About Nothing 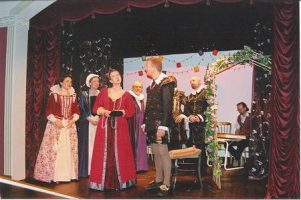 Womaniser and confirmed bachelor, Benedick, and quick-witted independent feminist, Beatrice, have their apparent hatred for each other readily converted to love by the simple tricks played by their friends and family.

The Taming of the Shrew

Petruchio, a chauvinistic gold-digger will stop at nothing to gain a rich wife, even if the object of his desire is the fiery ‘shrew, Katharina. Katharina’s family, who had given up all hope of finding a man who will stand up to her exhibitions of temper, are delighted that she seems to have met her match. Petruchio finally ‘tames’ Kate but not without a fight and we discover that neither partner is quite as they outwardly appear. 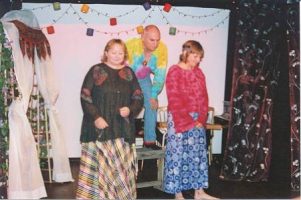 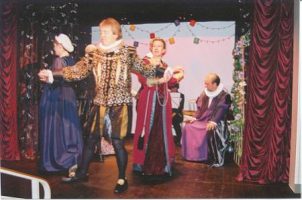 Hermia has eloped with her lover Lysander to escape a forced marriage to Demetrius. Demetrius, rejecting Helena’s love, chases into the woods after his lost bride-to-be, hotly pursued by the love-lorn Helena. A love potion administered to Lysander by mistake confuses the plot when it causes Lysander to transfer his affection from Hermia to Helena. Meanwhile Oberon, Puck, Titania and her fairy train keep watch over and influence the events. 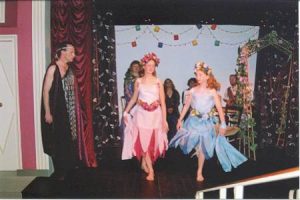 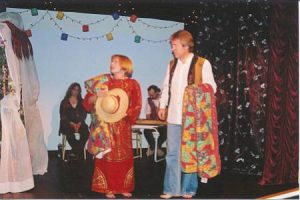 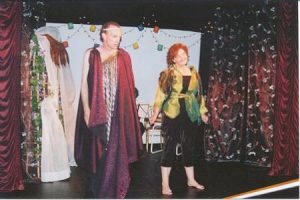 Juliet prepares to secretly marry her young lover Romeo, whom her parents have forbidden her to see. In order to avoid a marriage arranged by her parents she takes a potion which will make her appear dead when she is in fact only sleeping. Romeo will then come to her tomb and the two can escape together.

When Mistress Ford and Mistress Page each receive a love letter from Falstaff confessing his love, passions are ignited.

The Merchant of Venice

Lorenzo and Jessica talk to each other of love and reconciliation.