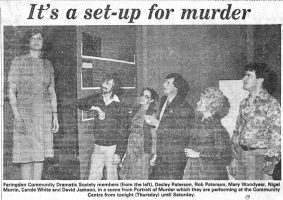 A year ago successful novelist Paula Barlow was badly injured in an apparent accident which totally destroyed her memory. On returning home, instead of finding security in what should be familiar surroundings, she faces tension, lies and deceit until the past returns to confront her in a truly dramatic climax.

The action of the play passes in the living-room of the Barlow’s house in Kent. Time – the present.